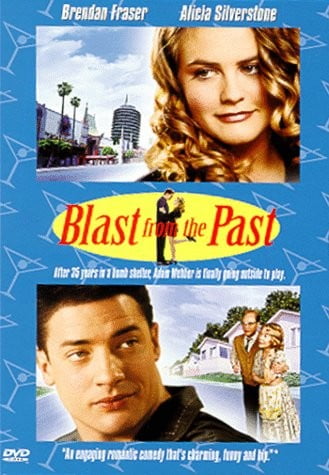 Brendan Fraser plays a 35 year old man mistakenly vaulted in a bomb shelter with his parents (Sissy Spacek and Christopher Walken) since the early 60s. Now, he’s out in modern L.A., and he’s wearing a windbreaker and calling black people “Negroes.”

While Fraser is pretty funny, and Walken and Spacek are properly “kooky” as conservative parents who took to the fallout shelter and never came out during the Cuban Missile Crisis, this romantic comedy lags.  Alicia Silverstone, as the love interest, is dull and plump, a bad actress with weak comic timing (didn’t she come and go in a hurry?). Dave Foley, of “Kids in the Hall,” plays Silverstone’s gay, advice-dispensing roommate, but he’s forced, and he’s given none of the snappy patter of a Cam or Mitchell from “Modern Family” (and if you needed someone to play the gay roommate from “Kids in the Hall”, why not Scott Thompson?)

In the end, fish-out-of-water can only get you so far.