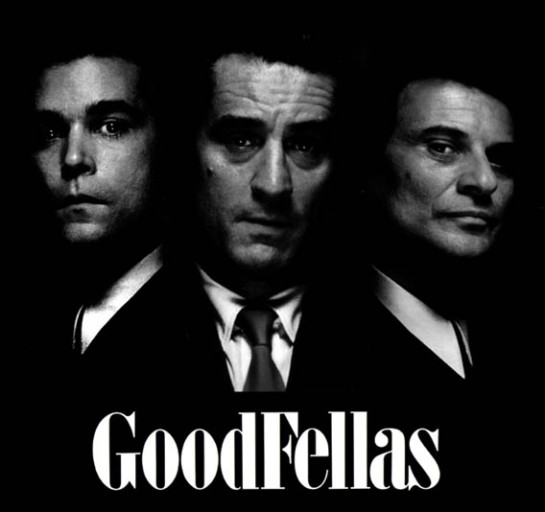 This movie is so good that AFI’s ranking of 94 is an embarrasment (Forrest Gump is rated almost 20 slots higher). From the moment of Ray Liotta’s first voice-over line (I don’t think there is more effective voice-over work in any film ever) to the maniacal, miserable fall, Scorsese chronicles the mob as fantasy to the crime as reality from Liotta’s boyhood to Witness Protection schlub. In re-viewing, here are my thoughts on what makes Goodfellas the greatest crime picture ever made.

The camera-work. The sheer audacity of Scorcese’s tracking shots make their counterparts in The Player and Boogie Nights seem gimmicky.  Scorcese goes on without an edit, not as flourish, but to introduce the cast of mob characters and their life  The uninterrupted trip of Liotta getting into a nightclub speaks volumes about the life – the excitement of his date (Lorraine Bracco) as they are being guided to the best table in the house is shared by the audience.  As we take the trip with Bracco, we are introduced to the glitz during a seemless dreamy waltz.  This is the difference between Spike Lee silliness (floating characters) and skill with purpose.

The Feel.  It looks and sounds right in every respect, from the kitschy Tiki bars to the outlandishly tacky apartments and home to the ghastly look of the mobster wives to the diners and late night drives.   Better, Scorsese, as always, picks the right song for each trip.

Liotta, Pesci and DeNiro, especially Pesci. Liotta, like us, is the outsider, though he is effortlessly conscripted.  Still, he plays Henry Hill as a shade removed from the crazy of DeNiro and Pesci.  He’s a brute but he is not an innate killer.  Thus we are capable of remaining empathetic.  Robert De Niro also keeps vestiges of humanity, though in fact, he is only one notch below Joe Pesci in terms of sociopathy. Pesci, however, is the most honest character and the heart of the picture.  He is a killer, his code is barbaric and his emotions uncontrolled. Which means that he can beat you near to death and comfortably have a meal right after.

Authenticity. The best example of this is not in the look or the sets or the music, but rather, in Scorcese’s portrayal of the easy violence, which one assumes he knows from his roots and/or from working with writer and former Mafia journalist Nicholas Pileggi. No better example is when Pesci comes back to kill the “made” guy (Scorsese and The Sopranos regular Frank Vincent) for busting his balls.  We know Pesci is going to snap, but the moment Pesci attacks him, De Niro jumps in viciously to assist, no hesitation. De Niro knows that killing the guy is stupid. In fact, De Niro was calming Pesci down earlier in the evening, trying to smooth things over. But the attack sets him off like a shark smelling blood, and he instinctively jumps in to rip the guy’s head apart. He’s an animal in a feeding frenzy.

Scorsese’s Casino is actually a deeper film about the Mob, but Goodfellas is the landmark, a precursor to the humor of The Sopranos and an obliteration of the operatic grandiosity of the life left to us by The Godfather.