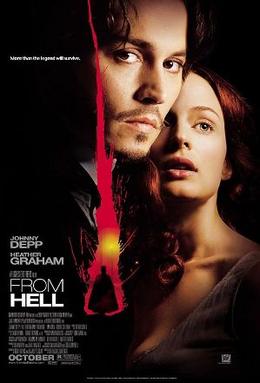 A stylish revamp of the Jack the Ripper saga.   It has many things wrong with it.  Here are a few:

1) Johnny Depp, the lead Ripper investigator, is a psychic, which comes in handy;

2) The Ripper entices prostitutes with grapes, a neat fact the investigators choose to withhold from potential victims (as well as the fact that the Ripper is an educated man);

3) Heather Graham is about as convincing as a Whitechapel prostitute as I might be as the lead in “The Clint Eastwood Story.”

4) Every murder (and every autopsy/crime scene) is shown.  Each more bloody than the next.  Exhausting.

The crime of it is not the gore, tedium and heavy hand, but the fact that this Hughes Brothers picture (the Hughes Brothers of the classic Menace II Society) was the end for them until 9 years later, when they helmed The Book of Eli.

It is bad enough that Hollywood would hand a period piece to a couple of young directors who made their bones on the verisimilitude of modern South Central LA.  But after they botch it, nine years later, they’re given The Book of Eli?