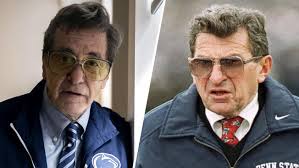 Barry Levinson’s mostly steady hand and a mature, measured script for such a hot-button topic makes this HBO flick a little better than passable.  Pacino is thankfully and appropriately subdued as the confused yet canny football coach who may or may not have been alerted to the molesting of young boys by his longtime former assistant, Gerry Sandusky.  The best scenes are with Paterno and his wife and children as the enormity of the scandal dawns on them.  As they try to wrap their heads around the situation, and the responses of their husband and father beget more questions, you can see the coach sink into himself.  Is he wracked with guilt or is he struggling mightily to simply remember?  Pacino does a great job of not letting on.  At one point, as he reads the grand jury documentation, he asks, “What is sodomy?” and you’re embarrassed for him.

When we are not in the room with the family, we are peppered by the reflexive support of the campus kids and the media assault.  Indeed, Levinson uses talk show speechifying as a second soundtrack.  As the scandal intensifies, the commentators ratchet up the condemnation, until you sense Paterno pinned between the unthinking, unwavering acolytes of his football world and the collective, moralizing bloviation of the punditry.

The film has a few pretty big problems.  The opening, a montage of the day Paterno sets the record for most college football wins, is overwrought and over-the-top in its expanse and heavy import.  Another scene, where the weight of the scandal appears to break Paterno down, is downright ridiculous.  Levinson has the old coach wander from room to room, a half confused victim of dementia, a half pained suffered of an Excedrin headache.  It went on so long, me and my wife started guessing how many rooms existed in the seemingly modest Paterno house (he appeared to be in at least a dozen).

There’s also a cheap shot at the end, where the intrepid reporter gets a call from someone who says he complained about abuse at the hands of Sandusky directly to Paterno . . . in 1976.  This was covered as some sort of bombshell, and while Paterno could certainly be legitimately held to account for his lackluster response to the allegations of abuse in 2001 (he reported the allegations to university officials and then apparently thought little more of the whole thing), an unverified 1976 allegation from an anonymous accuser seems a weak hook to hang your hat on.  Very much off-kilter from the approach taken most of the film.