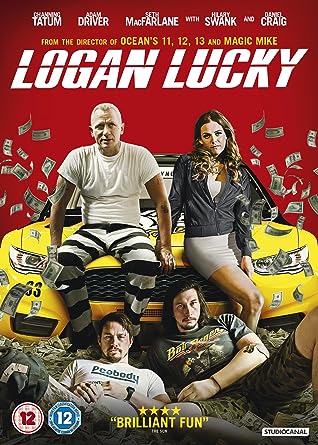 Steven Soderbergh is a more-than competent director with some solid films (Contagion, Traffic, King of the Hill, two of the three Oceans movies), some overpraised ones (Sex, Lies and Videotape, Erin Brockovich), a few minor masterpieces (The Limey, Out of Sight)  and some super duds (The Underneath,  Solaris, The Informant, The Good German).  A few years back, he announced his retirement, leaving as his last directorial effort the minor, pedestrian Behind the Candelabra, the definitive Liberace movie literally no one was waiting for.  Soderbergh had concluded, “I just don’t think movies matter as much any more, culturally”, and it showed.

I presume Soderbergh recognized that he didn’t want to go out on a pop fly, and that his exit was a little whiny (“The worst development in film-making – particularly in the last five years – is how badly directors are treated” he huffed), so he’s gotten back into the game, directing a few TV series, and, returning to the big screen with Logan Lucky.

Unfortunately, if there was ever a movie that didn’t matter, culturally or otherwise, Logan Lucky is it, a limp re-make of Soderbergh’s Oceans flicks, sans the charm of Clooney, Pitt and gang. It also lacks the fun plotting of the casino heists and the Vegas glitz.  Instead, we get Channing Tatum, Adam Driver and Daniel Craig playing at Boss Hog accents; a big score (at the Charlotte Speedway) that is plodding and lazy; and dull West Virginia and Charlotte standing in for the Bellagio fountains.

Instantly forgettable and in at least one way (using Seth McFarlane as a Brit with a worse accent than Don Cheadle in the Oceans movies) unforgivable.