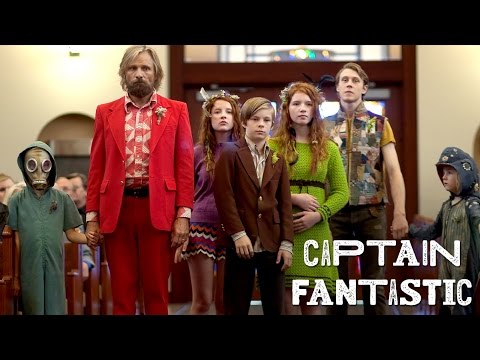 Viggo Mortensen, a survivalist and Noam Chomsky acolyte (not a snide dig using Chomsky; Chomsky is literally the spiritual and intellectual leader guide to Mortensen’s character), lives in the woods with his six children where he home schools and nature trains them (in the first scene, his teen son jumps a deer, stabs it for dinner and is rewarded with “man” designation).  Their mother, however, is away, battling mental illness.  When she passes, the modern Swiss Family Robinson treks to the home of her father (Frank Langella) who is the bad guy because he has dough, lives on a golf course and wants to take the children away from Viggo.  Along the way, Viggo condescends to his sister about what dullards her two boys are; prattles on about the empty consumerist nature of the United States; and sits the kids down at a diner, dangling awesome food possibilities in front of them, only to leave in high nutritionist dudgeon.

Mortensen, who is nominated for best actor, does the best with a character who is constantly whipsawed between rock-solid moral assuredness and deep doubt, such that at best, he seems like a mercurial preener and at worst, a total dick.  He constantly craps on the mores and standards of his sister and in-laws, only to give half-assed apologies, and his crashing of his wife’s funeral is an exercise in narcissism that makes any further action on his part highly suspect.  The kids are brilliant and self-sufficient but so underdeveloped that when they start to share their take on their current condition, it all comes from nowhere.

The family is laughably Hollywoodized – the girls don’t have hairy armpits, the kids don’t stink (they should) and the tenets of their creed are easily discarded for a few cheap yuks.

The ending is gruesome schmaltz, a family sing-along/send off for Mom to a tribal acoustic version of Sweet Child  O’ Mine.