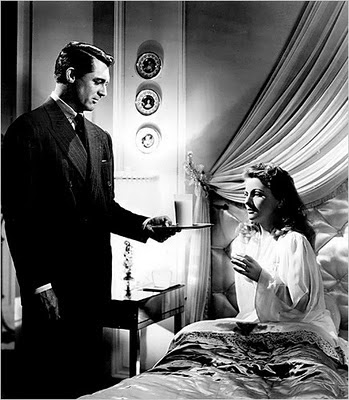 And those stars go to Alfred Hitchcock’s deft hand and Cary Grant’s irrepressible charm. Grant plays a society cad who gloms on to spinster Joan Fontaine, who impulsively marries him out of rebellion and passion. She soon learn Grant, charming though he may be, is a liar, a thief and a lay-about gambler, and his debts may be propelling him to more capital crimes. The essential tension, however, is wasted. The deck is so stacked against Grant that when he professes “it was all a misunderstanding”, you’re left disappointed at the expenditure of time and contemptuous of Fontaine, who just seems like a ninny. If Grant could not commit the capital crime, the studio sure did by insisting their star male lead could not play a wife murderer.

The film was nominated for Best Picture, Fontaine won Best Actress for her very delicate, frail but stagey performance which does not travel, and in an interview with Francois Truffaut, Hitchcock summed it up when he reported the actions of a producer who initially took every scene out that indicated Grant was a murderer, leaving a 55 minute product.