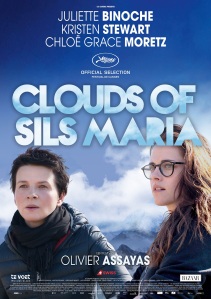 (Reporting from the Blizzard of ’16)

Writer-director Olivier Assayas has created a beautiful character study and meditation on the subjects of stardom, aging and generational disconnect.  Juliette Binoche gives the performance of her career as a world famous actress.  She made her stage debut twenty years earlier as an ingénue who seduces and destroys an older woman. In a revival, Binoche is asked to play the part of the older woman, and she must deal with the passage of time, the change in her viewpoint, the suicide of her old friend the playwright, and her own vulnerability to youth in the guises of her personal assistant (Kristen Stewart) and the young superstar actress playing Binoche’s debut role (Chloe Grace Moretz). Stewart is Binoche’s connection to the world of celebrity and Internet media and must support Binoche as she becomes increasingly nervous about her performance while suffering her neediness and condescension.  Grace Moretz is coming to destroy her

Binoche is noble, fragile, and bravely bears her soul and insecurities in the face of time and the vagaries of celebrity. When we meet her, she is glamorous, beautifully made up for a Chanel photo shoot and a tribute to the playwright. When Binoche makes herself sexually available to an old flame who mistreated her in the past, only to be reduced to the role of the spurned lover waiting in the hotel for the visit that never comes, it is deeply affecting.

Binoche is ambivalent about playing the role because she knows all too well the fragile state of her age, which results in passive aggressive behavior towards Stewart and capitulation to Grace Moretz. As she prepares for the role with Stewart, she is natural, without makeup and the accouterments of the star. It is as if her armor has been discarded.

Grace Moretz is electric as the the new, hot thing, seemingly deferential to Binoche while harried by paparazzi and swirling scandal. Stewart is canny, but her problems as an actress continue. Her appeal has always struck me as inexplicable. At her worst, she is capable of mere sullen boredom, and at her best, a medium cool disaffection. Here, she does a bit better, but she can’t quite elevate her blase’ demeanor to a suggestion of anything deeper.  Still, she’s adept, and does not get in the way here.