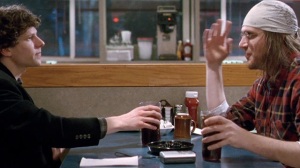 The film is a flawless meander over a few days with an enigmatic and at times debilitatingly insecure novelist.  Jason Segal’s turn as author David Foster Wallace is soul-deep, a particularly impressive performance given that it is from a light comedian. As a film about a doomed man (Wallace hung himself 12 years after the events depicted), the picture is also refreshingly light on foreboding. We are not here to observe the clues that led to Wallace’s demise.  Rather, we are here to enjoy the mind of the author, while being made privy to some of the demons within him, as he is interviewed by a Rolling Stone writer, played by Jesse Eisenberg. We are allowed to hang out with two writers as they discuss their craft, their fears, and America; fence over their different viewpoints and goals through the interview process; and eventually, form a fleeting friendship. Thankfully, the movie is so self assured it doesn’t feel the need to provide the expected big reveal or the emotional paroxysm.

But perhaps what is best about this film – a film about a writer where we do not hear him recite his prose – is the fact that you’ll become affected enough to go read his work after the movie is over. I generally do not read fiction, I have never read Wallace (with the exception of a few magazine pieces), but on the strength of this very personal and intriguing film will read one of his novels.