Very much in the vein of Godzilla, Jurassic World is just gripping and exciting enough, you almost look past its flaws.

The script is cobbled-together from the Spielberg factory and is largely a knock-off. We come to the park with kids scarred by impending divorce bond (two, like in the first movie) where they are met by their aunt, a park executive, who has no parenting instincts (ala’ Sam Neill, in the first movie).  There is also a bad guy who wants to use velociraptors for, you guessed it, military purposes, and plenty of discussions about the ethics of all of this (much less impressive coming from the likes of B.D Wong and Chris Pratt, as opposed to Sir Richard Attenborough and Jeff Goldblum). And our heroes live because the dinosaurs fight amongst themselves (again, as in the first movie).

Speaking of Pratt, he’s in a bit of bind here. Pratt’s wheelhouse is a certain goofy but childishly masculine charm, best represented in Guardians of the Galaxy and Moneyball (as the confused, boyish catcher-turned-first-baseman). Here, when Pratt flashes that charm – mainly in banter with the aunt, Bryce Dallas Howard – he’s fun to watch. But Pratt also tries to play it straight, and he simply lacks the gravitas to do so.  A fair comparator is Bruce Willis, who went from the light comedy of TV and Moonlighting to the sarcastic aside of John McClane in the Die Hard flicks to a plausible straight hero. But Willis started late and had the rough look of an older man, coupled with a menace he could draw upon. Pratt ain’t there yet and it’s hard to tell when he is being serious or joking.

There’s also a fair amount of lazy plotting.  It is never adequately explained why certain features of the new, terrifying animal – Indominus Rex – were allowed to manifest themselves in the creature (such as its ability to think like George Patton) without also injecting a kill switch.  Also, the response of the park staff is less professional than what you might get on a windy day at Busch Gardens, and if Busch Gardens keeps you on a metal track for the Old Time Antique Car Ride, there is no way a park would allow its patrons to self-navigate dinosaurs in one of these: 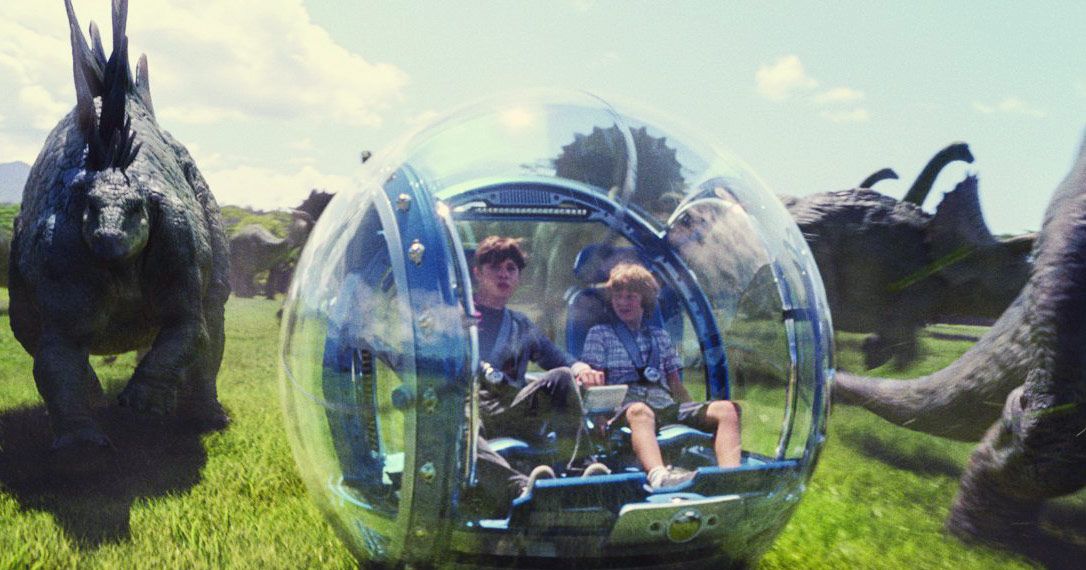 Still, this is an easy and fun movie which, at last count, has made enough dough to bail out Greece.