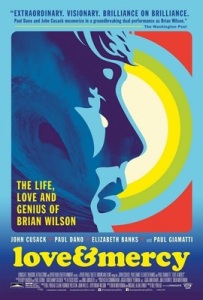 A competent biopic that smartly alternates between the rise of Beach Boys impresario Brian Wilson (played as a young man by Paul Dano) and his later life (during which he is played by John Cusack), where the ravages of mental illness, substance abuse and the dubious oversight of Svengali psychiatrist Eugene Landy (Paul Giamatti) have taken their toll. We meet the older Wilson as he tries to buy a Cadillac from saleswoman Melinda Ledbetter (Elizabeth Banks), revealing the only peace he can find, alone with her in the car at the dealership, while Giamatti and his associates hover on the other side of the glass.

The film spaces nicely, and the early pressures on Dano (fear of flying, his abusive and controlling father, the stress of touring, an aversion to conflict) are manifested in Cusack’s caged, distrusting performance, one of many really nice touches in the film.  Near first time director Bill Pohlad delves into but doesn’t overplay Wilson’s demons, choosing to give equal access to his love of the art of pop music and visionary work in the studio.  Nothing in the picture feels hackneyed or stale, a difficult feat in the face of traditional musical biopics like Ray and Walk the Line.  Also, in the era where “Behind the Music” has left these stories vulnerable to the Dewey Cox treatment, the film feels fresh and immune to parody.

Banks and Cusack also radiate the wonder of first love, subordinating the “bio” aspect of the movie to a heartfelt romance.  They have a convincing chemistry, which bolsters the efforts she undertakes to wrest Wilson from Landy.

As Landy, Giamatti is the weakest link.  He is ferocious where he should be merely intrusive, maniacal instead of crafty.  Landy may well have been that excessive, but he didn’t just walk off the street; he was a pop psychologist to many stars, from Alice Cooper to Rod Steiger.  The performance is so over the top, you wonder how Wilson, even in his vulnerable state, could have succumbed to such a bully and how Landy could have had the smarts to set himself up so nicely.