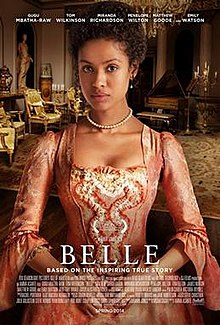 A promising period piece based on the true story of the illegitimate, black daughter (Gugu Mbatha-Raw) of a British naval officer, given to the care of his aunt and uncle (Tom Wilkinson and Emily Watson) as a child in the late 18th century. Dido Elizabeth Belle is raised with a foot in two worlds — with title, means (200 pounds a year) and support yet still divorced from full status (for example, she may not dine with the family when guests are present). Complicating matters is the fact that Wilkinson is the Earl of Mansfield and the Lord Chief Justice, deliberating over a fraud case in which slavers may have thrown their sickly human cargo overboard for the insurance proceeds.

The film is lush and has a Downton Abbey feel. Unfortunately, it’s about as subtle, anachronistic and schmaltzy as Downton Abbey.  Belle must contend with the easy racism of her time, racism represented by an odious, money grubbing family that includes scheming Miranda Richardson and her eldest son, Tom Felton (Draco Malfoy from The Harry Potter movies, who is really evil; you can tell because he was a member of Slytherin House and he sneers in every scene). Everything is spelled out for the audience, and there is no nuance to any character. Belle’s true love, played by Sam Reid, is the abolitionist son of a minister, so ardent and well-meaning you want to punch him. And as Wilkinson agonizes over his court decision and rails against the impudence of Reid, Watson reminds him that she once knew a young man who wanted to change the world.  Guess who that young man was?

The case at the heart of the picture is also decidedly and unnecessarily dull. So dull that in real life, the owners dropped the claim against the insurance company amidst a storm of bad publicity. Yet, the real Earl of Mansfield presided over a case much better suited to the film, that of a slave who had been brought to England, escaped, was caught and then was forced onto a ship bound for the West Indies. The slave owner argued his right over property, but the Earl set the slave free, judging that colony slave laws were of no force in England and concluding, “The state of slavery is so odious that nothing can be suffered to support it.”

Such an interesting life deserved a better picture.