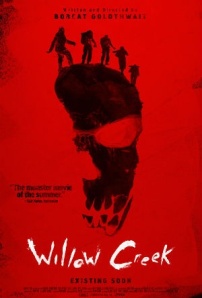 The ingenious creators of The Blair Witch Project knew enough not to go back in the woods again with their follow up. But 15 years later, director Bobcat Goldthwait has picked up the torch, only this time, his unfortunate videographers are on the trail of Bigfoot, not ritual killers. After slumming with the locals, where absolutely no tension mounts and no character is developed, our couple (he, an overgrown kid obsessed with the Bigfoot sighting, she a supportive actress girlfriend, neither very interesting) go into the woods of the Pacific Northwest. Unlike their predecessors in the woods of Blair Witch’s Burkittsville, these geniuses receive three very clear early warnings to get the hell out of Dodge, but hey, what’s a camping trip without a sinister, threatening local, your clothing mysteriously hung from the trees and a wrecked campsite? We must sally forth to find, well, not even Bigfoot, but the place where this iconic picture was taken.

This has all been done and much better at that (the scene where the couple realize they are lost is a criminal rip-off of Blair Witch). The characters are so culpable they repel sympathy, and the acting is woeful (Bryce Johnson, the Bigfoot enthusiast, conveys fear with a goofy face that I’m sure he assumes is grim determination but comes off as half concussed, half constipated).

There’s also not a scary moment in the film.

One star, though, for the kitschy Bigfoot locales and The Bigfoot burger.