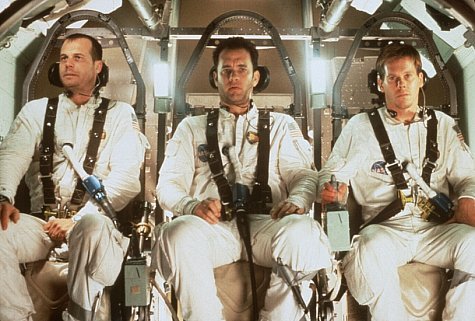 A thrilling and engaging piece of Americana and an homage to national ingenuity and purpose, this is the kind of film you hope your children watch (jocks and geeks and in-between alike, for they are all celebrated and shown as peers) and thereafter, become inspired.  I was surprised at how white-knuckle the re-creation of the near-doomed mission felt given I knew the outcome (Spoiler – the crew of Apollo 13 survived), but this is really edge-of-your-seat fare.

The performances are all excellent. Tom Hanks as mission commander Jim Lovell is hitting right in his sweet spot, the decent, measured everyman of Saving Private Ryan, Castaway and Philadelphia, and he is ably supported by Bill Paxton (a likeable but ever weakening Fred Haise) and Kevin Bacon (as Jack Swigert, added to the mission at the last minute, both defensive and independent). On the ground at home, Kathleen Quinlan is steely and vulnerable as Lovell’s wife, she underplays a role that is stock and often butchered by over drama (see Madeline Stowe as the suffering wife in We Were Soldiers), and she was deservedly nominated for Best Supporting Actress.  In Houston, it is a cast of seemingly thousands, led by Ed Harris as NASA Flight Director Gene Kranz, who work tirelessly to bring the crew back home to earth safely. At every moment, you recognize another character and/or commercial actor and say, “oh, yeah, he was in . . . .”

A year after the stunning visuals of Gravity, I expected the 20 year old Apollo 13 to feel dated. It does not.  But this is not a picture featuring aesthetics, but rather, the resourcefulness of all types of individuals engaged in a grand effort during a harrowing rescue mission, told without schmaltz or thick reverence.  The immediacy of the film comes in part from the fact that the dialogue between Houston and the astronauts is near verbatim from transcripts and recordings, and Hanks, Paxton and Bacon were all trained at NASA’s space camp in Huntsville, AL.  It’s Ron Howard’s best picture.