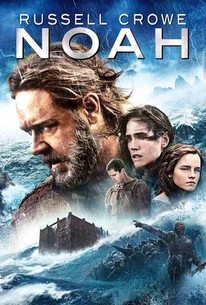 Noah is a modern day environmentalist/pacifist who is also a vegetarian, fights the rape of the land, and communes with Transformer-like monsters/fallen angels (it was quite a shock to learn that Optimus Prime was so critical to the Old Testament). God tells him to save the innocent; the animals. He complies.

Unfortunately for us, neither God or Noah cannot save this dreary and ponderous story nor can they remedy Darren Aronofsky’s leaden direction. I was surprised by James Gunn’s ability to handle a broad and sweeping epic in Guardians of the Galaxy given his prior experience with smaller films. In Noah, Aronofsky, who also has little experience with big films, does not surprise. He is completely lost visually, primarily relying on a slow backward tracking shot to say BIG! Some of the CGI, and there is a lot of it, looks as silly as Harry Hamlin-age Clash of the Titans.  The script, which Aronofsky co-wrote, is a repetitive mix of New Age blather (birds arrive and Crowe intones, “it begins”) and mundane domestic drama. The performances are rote, good actors intuiting “this is biblical” which they apparently perceive as solemn.

On the plus side, the making of this film means at least one less Aronofsky ode to masochism and sadism (although Aronofsky does let Russell Crowe sing again).

You also get the sense Aronofsky feels the film is getting away from him, so he relies more on Noah’s trippy dreams and his story of creation (a psychedelic light show and some stop-action photography), and indeed, they are welcome respites from the numbing dialogue.

And the flood is pretty damn cool.