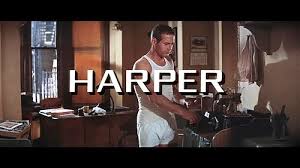 As part of the AFI Silver LA Modern series, I took my son and his friend to see a double-feature Saturday, the first entry being 1966’s Harper. I’d probably seen this Paul Newman vehicle 5 or 6 times before this weekend. It was on regular rotation as the 4 o’clock daily movie during the 1970s, and I was immediately enamored of the sarcastic, bedraggled Newman playing Ross McDonald’s updated private dick, Lew Archer, changed to Harper for the picture.

It turns out I’d never seen it in full. Those bastards at Channel 7 must have cut the living crap out of it, because there were at least four scenes absolutely new to me.

I digress. Harper is a treat. Newman’s jovial cynicism fits the character perfectly.  Thankfully, Frank Sinatra was not interested in the role.  He lacked Newman’s playfulness and ability to make fun of himself.  Interestingly, when Dirty Harry came around 5 years later, Sinatra again begged off, as did numerous others, and Newman was approached.  Turned off by its politics, Newman suggested Clint Eastwood.