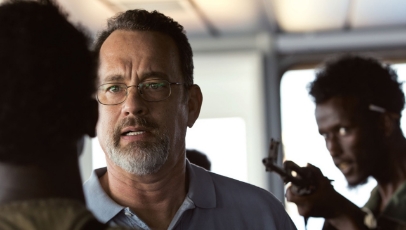 Director Paul Greengrass is adept at action and tension, as proven by the Bourne films and United 93. His quick-cut, frenetic, hand-held style is distinct, and the viewer is drawn to the edge of his seat in short order. A drawback, however, is that characterization takes a back seat to drive. In the Bourne films, the character is a cypher. He doesn’t even know who he is, so backstory and motivation are easily jettisoned. In United 93, as players in a great national tragedy, the characters are already known to us, and the story is more about how institutions respond to great crisis than individuals.

Captain Phillips is about two men – Captain Richard Phillips (Tom Hanks) and the pirate who takes his ship, Abduwali Muse (Barkhad Abdi), but what Greengrass reveals about each man is minimal. The former is quiet and somewhat worried about the world in a generic way (we learn this in a brief ride to the airport with his wife, a completely wasted Catherine Keener), and the latter is poor and engages in piracy at the behest of powerful men. Armed with these facts, Greengrass rapidly recreates the hijacking of Phillips’ ship, his kidnapping and his eventual rescue by Navy Seals. It’s all very exciting, if repetitive, as Phillips regularly advises or redirects Muse. But the picture aims no higher. One can be thankful that writer Billy Ray (The Hunger Games) avoids the “you and me, we are not so different” twaddle that usually surfaces in culture clashes, but the tedium of Hanks’ New England accent constantly warning, “you don’t want to do that” isn’t an appreciable step up.

The film has been criticized as whitewashing Phillips’ actions, but in my review of the charges against him, I find they were leveled by members of his crew suing the company, and Phillips acted as a witness for the defense, so I’m inclined to chalk the lame allegations to self-interest.

Worse than any polishing of Phillips is the script’s failure to answer a question that nagged me throughout the film. The cargo ship has strict procedures, locks, hoses, 1-800 numbers to call, flares, all to ward pirates off.  Yet, it lacks a single gun or any armed personnel. Why? The writer needed to clue us in as to the reason for this omission, especially with the visual of such a small and undermanned skiff approaching a massive, modern behemoth of a cargo ship.

I’m not saying guns should have been on the ship.  I don’t know.  But to not even address the issue in the script?  Huge mistake.