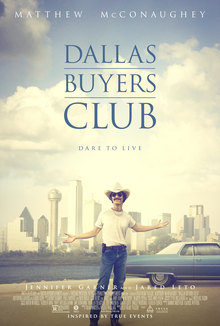 Matthew McConaughey’s transformation from wiry homophobic cowpoke to frail, determined AIDS survivor in mid-80s Texas is riveting, and he is ably supported by Jared Leto as a young transvestite who becomes his business partner (the business being the importation of non-FDA approved drugs for AIDS patients as an alternative to the toxic AZT). I expect Oscar nominations for both actors for their understated and moving performances, when showy and overwrought was to be expected.

The first half of the film paints a portrait of Ron Woodruff’s (McConaughey) fast living, his “I ain’t no homo” denial of his diagnosis, and his determination to stay alive and flourish, and your investment in his fate is total. But that leaves half a film, and unfortunately, the picture then stumbles. McConaughey makes the jump from survivor to advocate and soon, his finger in in the face of the FDA, the presumably corrupt dispensers of AZT at the hospital, Big Pharma, and yes . . . the system.

The institutional corruption and failure story has been done to death, and it carries a feel wholly distinct from what has come before – inauthenticity. I’ve read a great deal about Woodroof, and much of his tale is corroborated, but in that corroboration, there is no confirmation of the most Hollywoody of the film’s vignettes, such as his attacking the evil doctor in the hospital or his crashing of Big Pharma roll outs of AZT. Perhaps these things occurred, but even if they did, their depiction in the film is cheap and easy. As a historical aside, the availability and affordability of AZT was demanded most vigorously by Act-Up, and its therapeutic value was significantly greater than shown in the film.

There are other problems. Jennifer Garner, as the doctor who McConaughey charms to his side of the drug fight, is a fictional character. She never should have been drawn, or at least, she should have been cast with a more compelling actress. Garner is no match for McConaughey. She gamely tries to communicate empathy and dawning but musters mere wet eyes and wonder.

The bad guys (Dennis O’Hare and Richard Barkley) are stock, almost sneering suits and what Steve Zahn is doing in this picture as a 3 foot ridiculously mustachioed sheriff escapes me.

Otherwise, Dallas Buyer’s Club is a serviceable platform for McConaughey and Leto which eventually succumbs to its own good intentions.