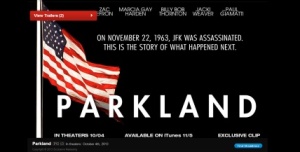 A fitting choice on the 50th anniversary of President Kennedy’s assassination, Parkland is a sober, gripping recreation of that event through the eyes of his Secret Service detail, the FBI office in Dallas, the medical staff at Parkland Hospital, Abraham Zapruder and Oswald’s family.  It is hard to achieve verisimilitude on such a well known event, but director Peter Landesman does just that in his handling of detail.  It seems unbelievable that the Secret Service would entrust the 8mm film shot by Zapruder to his care even as they desperately sought local facilities to develop the film, but it was his property, that’s exactly what they did, and the discussions over the disposition of the footage are fascinating. There is also an incredible frenzied argument between the Dallas medical examiner and the Secret Service staff over control of the body, which Landesman handles without judgment, and while it just seems incredible that Vice President Johnson is walled off in a hospital file room behind a barricade of guns while the medical staff works on the president, that too is a true fact not oft reported.

These touches are enhanced by determined performances from Billy Bob Thornton, Paul Giamatti, Colin Hanks, Zach Effron, Marcia Gay Harden, Mark Duplass and others. The scene where Kennedy’s aides and the Secret Service have to remove seats from the plane and jam the casket into the passenger area is particularly and deeply affecting.

The primary criticism of this film is that it lacks cohesion, that it somehow didn’t communicate something broader. Actually, that was its strength. The characters do not strive to communicate anything more than having to deal with a horrific event as best they can, and Landesman focuses on their plight, not on a deeper meaning to the event.  The assassination itself is enough to provide the context, and in an era when each of these bit players in a national trauma would likely be on cable news within minutes, the self-restraint of the picture underscores the self-restraint of the times.

The closest I came to smelling Hollywood was when they wheeled Oswald into the same emergency room as Kennedy and the senior nurse pushed him to another, saying, “He’s not going to live or die in here.”  It was artistic license, but it was appropriately chosen.

A minor nit – Texas Governor John Connally, also struck by rifle fire, was taken to Parkland as well, and it would have been interesting to have covered even in a small way his treatment while the hospital staff worked so desperately on Kennedy.