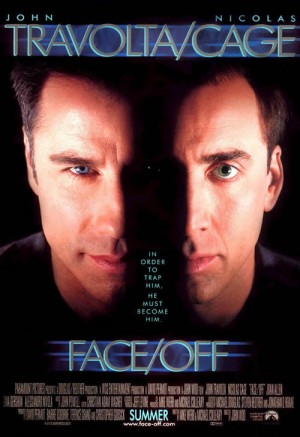 John Woo is an action hack, a Chinese director of minor renown who came to America and never looked back, making several big concept explosion-fests, like Broken Arrow, Mission Impossible II, Windtalkers (a Pacific theater World War II film that looks as if it was filmed in the Hollywood Hills) and Paycheck, which was once thought to be the coda to Ben Affleck’s career. You can only lose people so much money before you get benched, and Woo’s Windtalker‘s had a worldwide gross of $70 million on a budget of $115 million. Paycheck merely broke even domestically and appears to have signalled the end of the line for Woo.

But Woo left something for us, a ridiculous, giddy gem, to show that he had come to America and contributed. Face/Off stars Nicholas Cage as master terrorist Castor Troy. John Travolta is his Javert, Agent Sean Archer. Archer catches Troy, and puts him in a coma, which is fair play given that Troy murdered Archer’s young son. But Troy planted a bomb somewhere in LA before sleeping his deep sleep, and only Troy’s brother Pollox (Alessandra Nivola) knows the location of the bomb.

Well, you surgically remove the face of Castor Troy, put it on Sean Archer, Archer goes into the super-max prison where Pollox is housed and elicits the whereabouts of the explosive. Duh.

Except, when Archer is in prison with Troy’s face, Troy wakes up from his coma, forces the doctors to give him Archer’s face, kills everyone who knows about the whole “face/off” plan, keeps Archer in prison, and then reinstates “date night” with Archer’s wife (Joan Allen).

This is an absurd, dizzying, very funny movie, tailor-made for two of the greatest over-actors of our generation. Great film. Road House great.