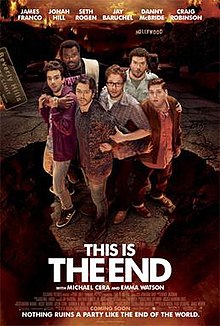 The first third is sharp. Comic actor Jay Baruchel comes to LA to hang with his big star pal Seth Rogen and before long, they’re at a celebrity-studded party at James Franco’s house, where Michael Cera snorts coke and slaps Rhianna’s ass, Jason Segal tries to convey the pedestrian nature of his sitcom to Kevin Hart (Hart is genuinely cracked up by the scenario Segal bemoans), and Jonah Hill shows pictures of his new rescue dog, who is incontinent and doesn’t know how to bark.  There are scads of other notables revealed in their self-involved element, which is great fun when The Apocalypse begins and they are dispatched in hideous, hilarious fashion. Example: a gaping sinkhole takes stars galore to the fiery depths and as Aziz Ansari clings to the edge, Craig Robinson responds to his pleas with a cold calculation.

Unfortunately, the middle third, which features Baruchel, Rogen, Hill, Franco and Robinson holed up and survivalist, is ragged. Much of it feels like creaky improv, and the self-centeredness becomes tedious as the fellas bicker and crack under the strain.  There is a self-satisfied laziness, a “this is cracking us up, so that’s enough” vibe that bores. Andrew O’Hehir nailed it: “I’m all in favor of movie stars making jokes at their own expense, but an entire movie based on that premise starts to seem like a suspiciously large amount of upside-down vanity.”

You know you’re in the tall grass when an SNL bit about chewing food for someone else is shamelessly recycled. Worse, Danny McBride joins the group, his turn is singularly unfunny, and he compensates by cranking up the volume.

Luckily, McBride exits, Hill is possessed by a demon, and a laugh-out-loud exorcism gets the picture back on pace to its largely satisfying conclusion.  Good laughs, but wait for DVD and you’ll value it more.