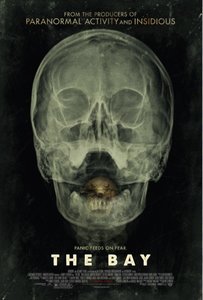 The Bay had a few things in its favor going in.  Director Barry Levinson is no slouch.  The “found media” approach is appealing to me, as is evidenced by my affection for the Paranormal Activity movies. And the premise – a small Maryland town is plagued by a bacteria that cuts through it on a July 4th celebration – had promise.  Two factors, one personal to me and the other a colossally stupid decision on Levinson’s part, resulted in my turning the flick off about a third in.

It wasn’t. Levinson was more interested in making an eco-horror tract than an actual scary movie.  As such, once his narrator (a witness to the July 4th disaster who is video-blogging) introduces us to the source of the plague (apparently, chicken shit being run off into the Chesapeake Bay), we learn that near everybody but our narrator dies.  At the outset!  She even points out people in the collated footage and says, “he dies” and “he doesn’t survive the day.” So, within 15 minutes, the audience knows the source of the killings and pretty much who dies.

Hell if I’m going to sit through pustules and boils on children under such circumstances.