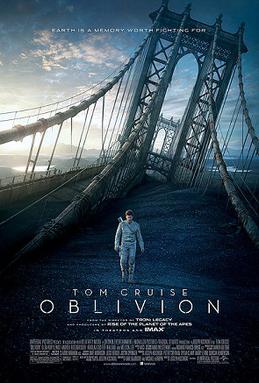 There has been a cataclysmic war. Aliens destroyed our moon leaving earth ravaged and uninhabitable.  While we won the war, the victory was pyrrhic, as we were forced to abandon earth to a few remaining aliens. In our new home in space, we need seawater, and the massive machines that suck it up are threatened by these aliens. Accordingly, earth is monitored and protected by drones, which are monitored and maintained by Tom Cruise and Andrea Riseborough.

But all is not as it seems. Spoilers follow.

1) the aliens threatening the seawater suckers are actually humans, and earth is actually habitable.

2) we didn’t win the war. We lost. Cruise and Riseborough are clones of two humans captured by the aliens. Hence, Cruise is always having dreams and flashbacks of pre-war earth. Which makes him curious. Which makes him increasingly problematic. Which makes him singularly the worst choice an alien could make to monitor earth.

The choice of clones who can dream and recollect their past is the least of the aliens’ ineptitude. When Cruise turns, and flies his vessel into the alien planet/ship, the alien (voiced by Melissa Leo) —

A. Allows Cruise to come into the planet/ship even though he’s clearly gone rogue

B. Detects that Cruise is nervous and lying, but does not detect that he has brought a big bomb with him.

Cruise actually seems to be telegraphing how ridiculous the film is as he acts. His face says, “Wait. This makes no sense. Does this makes sense to you?”

It’s also sloppy. When our Cruise gets bashed in the face, he gets a cut on his nose and a scrape on his cheek. Later, he meets one of his clones and pretends to be that clone. So he goes back to a Risenborough clone, and she doesn’t say, “hey, what happened to your face?”

On the plus side, Riseborough is beautiful.