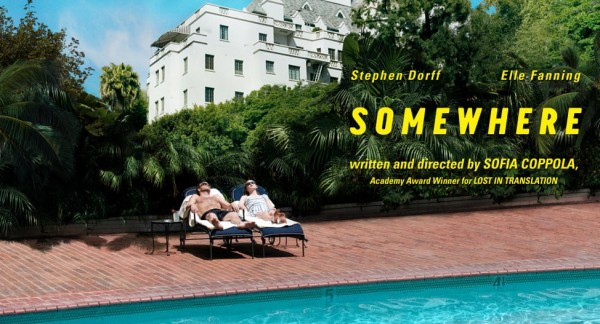 Sofia Coppola’s fourth feature is a return to the lackadaisical moodiness of her breakout film Lost in Translation, but instead of a disconnected and lonely established actor (Bill Murray) in Tokyo, we get a young Hollywood star (Stephen Dorff) when he is not working, every bit as disconnected. He lives in the Chateau Marmont, beds beautiful women regularly, spends time with his daughter (Ellie Fanning), and fights ennui. Unlike Lost in Translation, however, Dorff and Coppola don’t have jet lag or the outsider in a foreign land to explain or sustain the languid pace and feel. Dorff is also no Bill Murray. The latter registered pathos and bemusement in an understated manner, while Dorff (Blood and Wine, City of Industry, Feardotcom), who normally plays the heavy, lacks the chops and just seems tired.  He is not aided by Fanning, who seems adrift, and the two fail to convey any familial connection.

The result?  Coppola has made a film about a bored person that is boring. While the director is intrigued by long repetitive scenes (identical twin strippers who perform for Dorff, Dorff’s daughter performing a routine on ice, lots of freeway driving), the feeling is not mutual, and the scenes play interminably. Most others just feel like your own day if you were a dull Hollywood actor.

This doesn’t even work as the anti-Entourage. Mood pieces can be nice, but you need some meat on that bone, and Coppola’s paltry output (4 features in 11 years) is perhaps explained by the fact she has little to say.