Splash put Tom Hanks on the map as a leading man, though he was not yet filled-in and substantial.  Instead, Hanks was mannered in the way an actor can be after a long stint on a sitcom (Hanks was one of the Bosom Buddies from 1980 to 1982).  The film was also Ron Howard’s biggest feature, and its success would launch his career as the director of competent, workmanlike, earnest and generally dull films.

Hanks plays a love-phobic NYC businessman (derived from a childhood trauma – he fell off a Cape Cod ferry and encountered a mermaid).  In the depths of despair over his romantic failures, he returns to Cape Cod, falls in the water again, and is again rescued by the mermaid, now grown up (Daryl Hannah), who follows him to New York.  She is pursued by a cruel scientist (Eugene Levy), captured and probed to the point of sickness (ala’ E.T.) and then is busted out by Hanks, his brother (John Candy) and a repentant Levy.

Almost 30 years later, it’s a shock to see such a callow and obnoxious Hanks.  His voice is whiny, his character churlish and childish, and he seems too much the boy for the part, light as it is.  Perhaps because a mermaid has no experience with men, she just presumed Hanks was a good catch (ba-dump) but he is not.  He’s aggravating and surprisingly unfunny.

The same cannot be said for Candy, who steals the movie as the heavy, schmoozing, hard drinking,  yuk-yukking brother, excited to have one of his letters printed in Penthouse.  Levy is also good as the nerdly, bitter scientist, and Hannah is appropriately innocent and glowing as the fish-out-of-water.

It’s a cute movie, no more, but it ends in an uninentionally ridiculous fashion.  Hanks jumps in the water, making the choice to live the rest of his live with Hannah under the sea (he cannot, for reasons unexplained, ever return to land).  The credits roll and Hanks and Hannah swim the ocean as she shows him her world.  She has a big fin, he does not (when she was on land, when dry, she had legs and what goes along with them when they meet, and they were able to have a lot of sex).  Her world is murky and humdrum.  “See, this is the ocean floor.  And there is a conch.  And there are some fish.”  And what will Hanks eat? 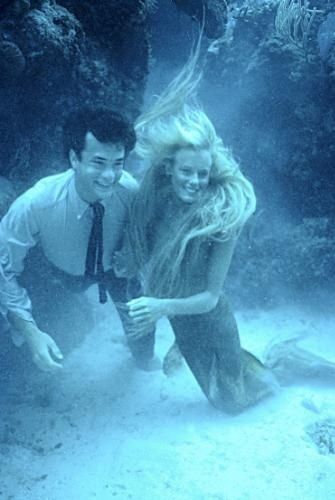 “This was a poor choice.”