Otto Preminger skillfully presents Allen Drury’s Pulitzer Prize winning political potboiler (published in 1959), the story of  a senatorial nomination (Henry Fonda, who is tapped to be Secretary of State)  gone bad under the weight of McCarthyite tactics, vicious blackmail, and a dying president.  The story is intricate, but Preminger, ever the pro, handles it with ease.  For example, if there is an issue of senatorial procedure, it is cleared up in a clever discussion with foreign tourists, who receive a crisp and unobtrusive explanation as to parliamentary procedure and the role of the vice president in American government.

It is decidedly not an all-star cast, but it is a very good one.  Franchot Tone, as the tough and dissipated president, wields his waning power with as much vigor as he can muster.  He has a wonderful scene where first he tries to smooth-talk the chair of the subcommittee handling the nomination (Don Murray) into reporting it out and when the senator does not budge, his flash of anger is actually a little terrifying.  Walter Pidgeon plays the Senate Majority leader, tasked with shepherding the nomination through, and Charles Laughton hams it up wonderfully as the Strom Thurmonesque senator who opposes the nominee.  Lew Ayres, as the in-over-his-head vice president, is a perfect combination of insecure and decent.

Having been born in Washington, D.C., the shots of the nation’s capitol in a more innocent and uncluttered time are worth the viewing in and of themselves.  And look close, because Will Geer (Grandpa Walton) plays the Senate minority leader and Betty White also has a role in that august body. 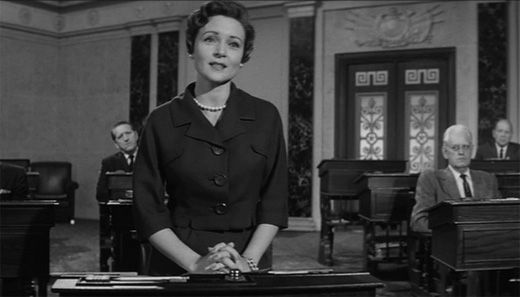