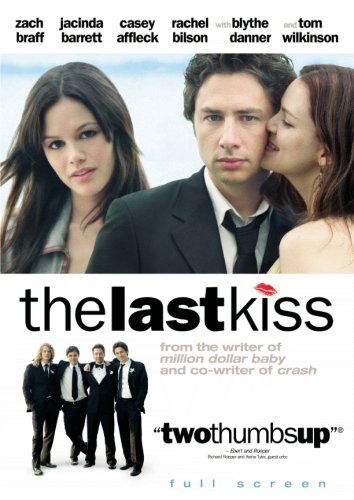 Zach Braff’s gruesome, false dramedy about a guy in his twenties who “has everything” but gets the jitters when his long time girlfriend (Jacinda Barrett) becomes pregnant.  He then recklessly beds a college hottie (Rachel Bilson), and the audience is treated to the extended punishment of his shrieking girlfriend, his unctuous attempts to elicit forgiveness, and side-stories of friends and family similarly bollixed by love, which, as I understand it, reduces everyone to shrieking hysterics.

This indeed may be the way of love for many people, but I sure don’t want to watch it, even with an implausible, redemptive, happy ending.  Braff’s responsibility is minimized.  He only starred in and co-wrote this disaster, with, shockingly, Oscar-winning screenwriter and Scientology attacker Paul Haggis (perhaps this is an excess of Scientology?)

But a curse is a curse, and his post-The Last Kiss, non “Scrubs” work is a cautionary tale — one Canadian movie (The High Cost of Living) and a cameo on a 2012 episode of “Cougar Town.”  He played the pizza delivery guy.