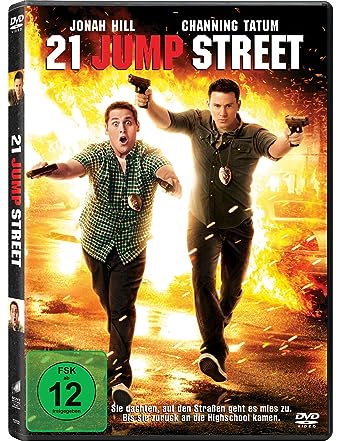 A successful parody of both high school teen flicks and buddy-cop movies (ala’ Hot Fuzz).  A blast of a picture, made better by strong chemistry between Jonah Hill and Channing Tatum.  Hill was the high school geek, Tatum on the top of the social totem pole, but after graduation, they both ended up on the police force, with dreams of car chases, shoot-outs and slo-mo explosions.  Instead, they are assigned as bike patrolmen, and after they screw that up, they are shipped off to the Jump Street division, where their youthful faces land them back in high school, undercover, to break up a drug ring.

So far so good, though not much beyond the formula.  But the material is elevated during their second stint in high school, where Tatum finds himself the geek.  Aggressive jocks, immediate put-downs and a hierarchy are out; tolerance and peace are in; and the main drug dealer (played by James Franco’s brother, Dave, in a very funny, emo/enviro turn) cleaves to the cooler Hill, leaving Tatum as the odd man out.  Hill basks in a high school popularity he always craved, leading to a great exchange where Tatum screams at Hill, “You’re in too deep” after he finds that Hill is filling out college applications in the hopes of matriculating at Berkeley with Franco.

Which brings me to Tatum, who I had unfairly classified as a graduate of the Josh Hartnett school of lobotomized acting.  Indeed, to watch Tatum play Roman period, as he attempted in The Eagle, was cringe-inducing.  But as Clint says, “A man has got to know his limitations.”  Tatum redeems himself and steals this picture with great timing and unexpected sensitivity.  He is also getting very good reviews for Steven Soderbergh’s Magic Mike.