Ridley’s Scott’s prequel to the Alien series fares much better than troubled installments 3 and 4 (which were not directed by Scott).  It does so without reliance on the now famed Alien monster or creation of another “haunted house in space” where the crew is picked off one-by-one.  Instead, Scott’s film opens with an ambitious recreation of the demise of our creators (or, at least, our forefathers).  In 2089, two scientists (Noomi Rapace and Logan Marshall-Green) deduce that disparate human societies with no connection and at different intervals in the world’s history communicated with another species (or is it?) from space.  So off they go, with another crew on an epic journey to discover from whence we came.  A cool Charlize Theron is in charge of the vessel Prometheus, but the ship is helmed by the down-home Idris Elba and it is guided by an android, David (Michael Fassbender).  They find what they are looking for but it is not what they thought, and Alien is born.

For what could have been a ponderous big idea picture, this movie is very tight, and if never quite as horrifying as Scott’s first movie, it is tense, scary and moody.  The feel is enhanced by a brooding, foreboding Marc Streitenfeld score.  Moreover, the characters feel gritty and realistic and each adds nice touches to roles that could otherwise have been stale.  Elba’s Stephen Stills-liking captain of the ship is an old soul; Theron’s corporate master hides a sense of humor; and Fassender, to whom one of the scientists makes a Pinnochio-reference, is half-boy in wonderment and half-efficient, emotionless machine, a worthy addition to the fine line of Alien androids who came before: 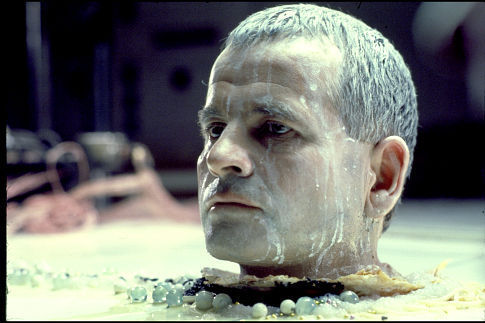 Scott also cleverly borrows from his own Blade Runner in the portrayal of David, who doesn’t possess Rutger Hauer’s maniacal desire to find his creator but does show more than a passing interest in the subject matter.

The script provides some explanation for why we started creating androids who are more than automatons:

Charlie Holloway: David, why are you wearing a suit, man?

David: I beg your pardon?

Charlie Holloway: You don’t breath, remember? So, why wear the suit?

David: I was designed like this, because you people are more comfortable interacting with your own kind. If I didn’t wear the suit, it would defeat the purpose.

David: Not too close I hope.

Scott bites off a little more than he can chew by adding an unnecessary twist at the end, and thereby rushing some scenes that could have been better developed.  It also has a few silly notes, like throwing in Rapace’s inability to get pregnant and having Rapace tell a crewmember he can’t bring a weapon because the mission is scientific . . . and he complies.  Come on!  Doesn’t he know that in space, no one can hear you scream?

Otherwise, it’s a very good picture, enhanced by the 3D.