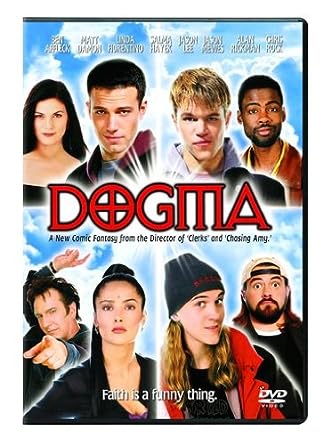 Prior to seeing Dogma, my dislike for Kevin Smith was pronounced.  His “breakout” self-financed picture Clerks was wildly overpraised and when he got a big budget behind him, he produced varying degrees of crap.  Mallrats showed that outside the confines of a convenience store, where camera movement is unnecessary, Smith was lost.  Chasing Amy proved Smith a lame, unfunny writer, incapable of directing actors, preferring to let them exfoliate, flatulate and otherwise bleed all over his print.

Dogma sucks as well, but there are some pleasures in the sucking, because Smith has written a hit-and-miss lampoon on the perversities of Catholicism.  Where he hits, he knocks it out of the park, as he plays fast and loose with the Bible in an effort to tell his modern fable (fallen angels trying to get back into Heaven; other angels, muses, apostles and assorted characters tryng to stop them).  Smith also takes a few decent shots at the Pope, and offers a heartfelt tribute to true faith, all in the zany format of The Russians are Coming, The Russians are Coming . . .

Smith still does not direct actors, so the players in Dogma look like they are in home movies (Linda Fiorentino manages an entire film with a smirk and rolled eyes). But his laissez-faire approach is made less ruinous by crafty renderings of four angels (Matt Damon, Ben Affleck, Jason Lee and Alan Rickman) and the best performance to-date by Smith regular, stoner Jason Mewes.  The movie is silly, but it is by far Smith’s best work.  What followed was more crap (Jay and Silent Bob Strike Back, Jersey Girl, Zack & Miri Make a Porno, Cop Out), and Smith’s sensibility that his crap was actually awesome and the studios don’t “get” it and that’s what makes him awesome and everyone else not awesome.

Which leads to a biography of a director highlighting the following: criticism of Paul Thomas Anderson, as if Anderson were a peer; becoming so overweight he is kicked off of a flight for not having bought two seats; attacking Bruce Willis (“I had no f***ing help from this dude whatsoever”) because Willis did not work hard enough to promote the execrable Cop Out); an attempt to market his last cruddy picture “outside the system”; and retiring, at the ripe old age of 41.