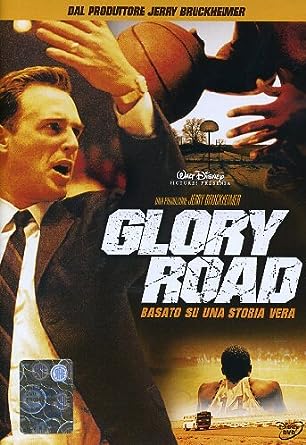 It is hard to find a worse sports movie than the hackneyed and overwrought Remember the Titans, but after Glory Road, I was almost wistful for the homespun wisdom of Denzel Washington and the beatific look on Will Patton’s face as racial understanding dawns upon him.

No matter what you may think of the delivery of Remember the Titans, and I think very little of it, with a few exceptions, it hewed however loosely to actual historical events. There was a high school football team in Alexandria, Virginia. The school was recently desegregated. The team did get a black coach and he did make the whites sit with blacks on the bus and the team did win the championship. Sure, the film exaggerated racial tensions, but that much is to be expected. It can’t be “feel good” if at first we don’t “feel bad.”

Glory Road is every bit as maudlin and formulaic as Remember the Titans (both films were produced by Jerry Bruckheimer, blast Motown, show the trading of racial culture between young men in the form of dance moves, and teach us valuable lessons about what’s “in here”) but it is also a perversion of history that goes way over the line.  Yes, 5 black men played on the 1965-66 Texas Western NCAA winning basketball team and yes, they were coached by Don Haskins.  This much is true.

But it wasn’t that big of a deal.  A decade before Texas Western won, the undefeated 1955-56 University of San Francisco team won the NCAA championship with a team that played four blacks — Bill Russell, K.C. Jones, Hal Perry and Gene Brown.  In 1958, the coaches’ All-American team was all black — Wilt Chamberlain of Kansas, Oscar Robertson of Cincinnati, Bob Boozer of Kansas State, Guy Rodgers of Temple and Elgin Baylor of Seattle.  In 1962, the University of Cincinnati started four black players when it won the NCAA championship.  Loyola University of Chicago started four when it won in 1963.

We also have the sports announcer screaming, “Who ever heard of Texas Western?”

A lot of people. Texas Western was a regional third place finisher in the 1964 NCAAs.

So, that sucks, but it gets worse.

The reason 5 black players got the start (and 7 played) was mundane – Haskins thought they were the best players.

Not so in the film.  Instead, we get some p.c. twaddle wherein Haskins tips his desire to make a statement to the team and the white players actually agree not to play so a larger societal point can be made.

How the screenwriter came to the conclusion that it was more edifying to make the achievement a gift from whites rather than earned by blacks, well . . . that’s for another day.