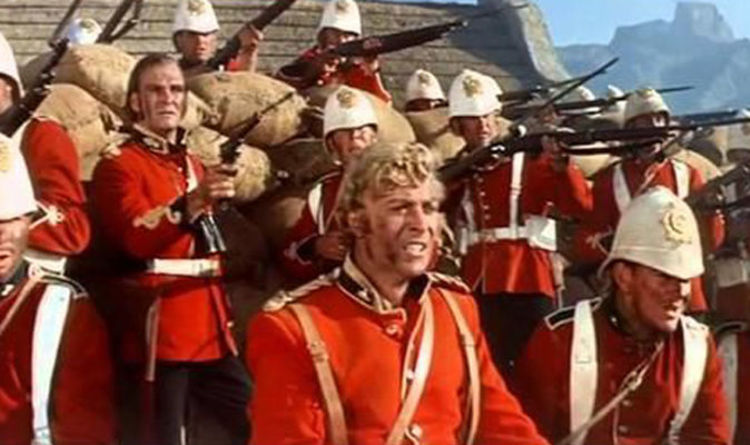 Zulu was released in 1964 (the year of my birth) and runs pretty regularly on both The History Channel and Turner Classic Movies.  Starring Stanley Baker (Lt. Chard) and Michael Caine (Lt. Bromhead) as two late 19th century British Army officers, the picture dramatizes the 1879 battle of Rorke’s Drift in the Natal province during the Anglo-Zulu war.

At Rorke’s Drift, a contingent of 150 British soldiers was trapped in a converted mission station they were garrisoning as a supply base and hospital.  A British army column of 1,200 men had been massacred by an overwhelming force of Zulus at Isandhlwana earlier in the day.  The Zulus moved on the mission station.  The film chronicles the frenzied defense of the mission by the tiny contingent against 4,000 Zulus.  At end, the Rorke’s Drift defense resulted in 11 Victoria Crosses, the most ever awarded for an action in one day.

The film is memorable for several reasons, including gripping close-action battle photography, sweeping and memorable vistas of the African landscape (most of the film was shot on location in South Africa), the tight scripting of at least 20 supporting characters, and the adult handling of the culture clash between Brit and Zulu with no intrusive moral lessonry.  This is a movie about these men in this battle at this time, not about the big bad white man exploiting the proud, wise, noble black man.  This is not to say the blacklisted screenwriter Cy Endfield completely ignores the culture clash, as is evidenced by a back-and-forth between Caine and a Boer co-defender (Adendorff) as Caine maligns the natives assisting the Brits:

Adendorff: What the hell do you mean “cowardly blacks?” They died on your side, didn’t they? And who the hell do you think is coming to wipe out your little command? The Grenadier Guards?

Endfield has a little to say about geopolitics as well:

Bromhead: Well done, Adendorff, we’ll make an Englishman of you yet!

Adendorff: No, thanks. I’m a Boer. The Zulus are the enemies of my blood. What are you doing here?

Bromhead: You don’t object to our help, I hope?

Adendorff: It all depends on what you damned English want for it, afterwards.

The back-and-forth between Baker and Caine is also subtle and well-crafted.  Caine is a patrician but junior in commission by a month.  Baker, a newcomer to the garrison sent to build a bridge, is an engineer and apparently lower born, so Caine is not at all happy about being usurped and particularly resentful of being second-in-command:

Bromhead: Still, the river cooled you off a bit though, eh?
[pause]

Bromhead: Who are you?

Bromhead: Bromhead. 24th. That’s my post… up there.
[points into middle distance]

Bromhead: You’ve come down from the column?

Lieutenant John Chard: That’s right. They want a bridge across the river.

Bromhead: Who said you could use my men?

Lieutenant John Chard: They were sitting around on their backsides, doing nothing.

Lieutenant John Chard: I was told that their officer was out hunting.

Bromhead: I’ll tell my man to clean your kit.

Bromhead: No bother… I’m not offering to clean it myself! Still, a chap ought to look smart in front of the men, don’t you think? Well chin-chin… do carry on with your mud pies.

As their situation presents itself, they join together in the heroic defense.

The picture is also aided by a memorably thundering John Barry score.

Next time you see it on television, try and catch it, and you’ll be treated to a taut classic.  My favorite line is after the first wave of Zulu warriors is repelled by the Brits, and Caine says, “60!, we got at least 60 wouldn’t you say?” and another character wryly replies “That leaves only 3,940.”