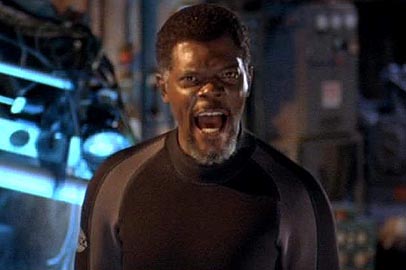 Deep Blue Sea. Researchers at a deep sea lab experiment on sharks by making their brains huge (4 times a normal size) so they can extract a secretion that will cure Alzheimers. The sharks (computer generated) get very smart. Too smart. A hurricane gives them an opportunity to hunt down several stock characters on the isolated station. None of the characters is “bankable” so their gruesome ends are ho hum. Samuel L. Jackson makes an appearance, and LL Cool J is the sea station cook who says things like “Damn, muthaf***a'” and “Peace out, bitc*” and “Open wide, you nappy toothed fu**a’.” And there is a Jacqueline Bisset look-a-like and damned if her diving suit doesn’t allow for ample cleavage.

There are three sharks, and they are all dispatched in manners strikingly similar to the Jaws films. Figure that.

All that said, this film can be fun and Jackson’s “give the sharks hell” speech is memorable. Snakes on a Plane memorable.