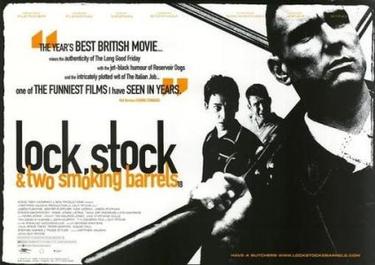 A black crime comedy that is full of visual gambits (many hit, many miss), this is a heist film billed as Great Britain’s Pulp Fiction. It has many similarities – the screwing around with sequence, the blase’ attitude to brutality, the quirky characters – but visually, it shares more in common with the Cohen Brothers first film, Blood Simple, though post-MTV in attitude. The director shows you every knife in his drawer, from stop action to slow motion 360 (an entertaining card game gone bad), to interspered music video. The result is a mash of a film, but it is populated by engaging players (a quartet of inept thieves, a trio of crass, drugged out marijuana brokers, a Mr. Big, a fatherly enforcer with a weird concept of family values, an Abbott and Costello) and it moves quickly (sometime, too quickly, because the Cockney is a bitch).

The director, Guy Ritchie, has moved on to the Robert Downey-Jude Law Sherlock Holmes flicks, infusing them with the same action and pace as this picture.

Does it have soul? None. It’s all flash and teeth.