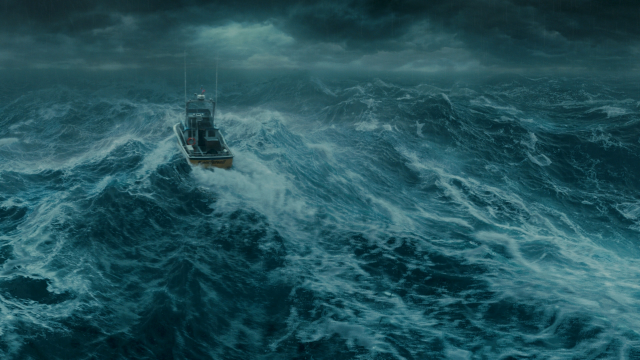 Twister but only marginally better acted.

The first 30 minutes is devoted to character development, so we can invest in our crew of six fishermen who will weather the storm of the century. There is the romantic captain on a bad streak (George Clooney); the young turk in love (Mark Wahlberg); the divorced father of one fighting to maintain a relationship with his son though he is a “man ‘o the sea” (John C. Reilly); the poor white trash outcast (William Fichtner); the old salt who just met true love in the form of a lonely, overweight woman at the bar (John Hawkes); and the superstitious guy (Allen Paine). Fichtner and Reilly don’t get along for reasons that make little sense, except that one must thereafter save the life of the other, which is exactly what happens.

We also meet the women who love the men who bring us fish fillets: a hard-bitten divorcee (Diane Lane) who curses the day a sail was set; a harder-bitten tavern owner and mother of two of our ill-fated crew (Sherry Jones); the competing hard-bitten captain who wants to transfer Clooney’s heart from the sea to her stern (Mary Elizabeth Mastraontonio); the hard-bitten overweight woman with two kids who waits for the old salt (Rusty Schwimmer); the ex-wife of Reilly; and some floozie who shacks up with the superstitious guy.

To a person, the characters are hackneyed and lame. Hollywood goes to Gloucestor and gets a Gorton’s fisherman accent.

As for the storm, it’s technologically impressive and makes the film watchable. The film is also helped by a gripping subplot involving a Coast Guard air/sea rescue (the insights into the pilots of the rescue helicopter are better communicated through a few lines during stress than all of the preceding soliloquies of the main characters).

But even during the technical wizardry, we are treated to two godawful bids for supporting actress nominations by Lane and Mastroantonio.  Big, gloppy, weepy, leaden and ultimately, unconvincing speeches.

The film even has an old sea captain making salty pronouncements at the bar.

The entire schmaltz-fest is coated in a gooey James Horner score. At end, rather than dab a tear from your eye, you are more inclined to go out for seafood and question the heroics of six men who risked life and limb (theirs and those of rescuers) so they could make a buck (they risk the storm because the ice machine on their boat broke, and if they wait the storm out, the fish will rot).

And they don’t wear life preservers.

Final note: the film is about sword fisherman, but they assure us that no animals were harmed during its filming, which means most of the picture’s budget was expended on wiggly, rubber fish.