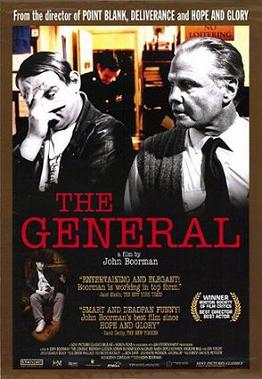 John Boorman’s film is the story of Martin Cahill, a Dublin gangster of the 1970s, 80s and 90s. Cahill’s story is fairly interesting. He was a small time thief whose gang rose up to become a crime wave so big that – after an art heist which included the swiping of a Vermeer – the police followed him everywhere (not stake-out following, but standing at his front door and walking 3 feet behind him following). His attempts to shake his tails, his planning and execution of robberies, his avoidance of conviction on an earlier heist, and his constant obscuring of his own face from public view are stuff of crime legend. Brendan Gleeson has great fun with a simple character in ridiculous circumstances.

Boorman writes good patter between the crooks, and he paces his heist scenes well, all with a comic touch. Boorman also has a keen insight into the economic and political pressures in everyday Irish life, and he presents his observations without any great speechifying.

There are two glaring problems with the film. First, Jon Voight plays the Inspector who hounds Cahill. Voight is a glutton for scenery, and his brogue is something you see in an Irish Spring commercial. I understand Boorman and Voight go way back to Deliverance days, but Voight’s presence here is very disconcerting.

Second, Boorman shows Cahill doing something so brutal about 3/5 through the film thatyou withdraw emotional investment in Cahill. While Boorman tries to make it all part of the lore of Cahill, in fact, tonally, the film seemed off-kilter from that point forward.

Therein lies the rub with real-life crook pictures. Cahill is portrayed as man of vision, and a good guy, one in a line of devil-may-care thieves in a corrupt system. His associates are all twinkle-in-the-eye goodfellas just trying to get by. This is old hat, from the Jesse James just being a misunderstood man of honor file. In fact, Cahill was a vicious thug, as is necessary if you are going to net 40 million pounds over a 20 year career. He attempted to blow up a forensic scientist who was to testify against him. His gang was not just band of merry robbers, but they participated in extortion, heroin dealing, and rape. Indeed, Cahill once nailed a victim to a snooker table, and in 1993, one of Cahill’s associates was arrested and charged with raping his own 14-year-old daughter (Cahill personally intimidated the young girl giving evidence).