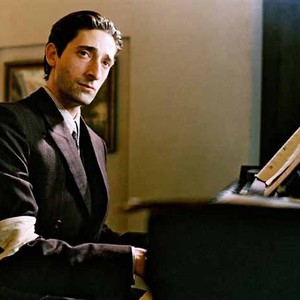 Roman Polanski won best director and Adrien Brody won best actor, so I expected something special.  I was disappointed. The story of a Polish pianist and his grueling fight for survival during the Nazi occupation (and extermination) of Warsaw depends on one caring for the lead (Brody). And to the extent one cares for any human made to endure unendurable suffering, the film carries you through.  But it becomes more of an assignment than an enjoyment. Brody is a blank slate in freedom and notoriety (he is a well known musician), and he becomes even less interesting during the Nazi occupation (most of which he spends hiding in apartments provided to him by sympathetic non-Jewish Poles).

The picture is beautiful – the scenes of a devastated Jewish ghetto are particularly memorable.  And the slow, desperate demise of Brody’s family, who incur one withdrawn right after another while managing to stick together, is affecting.  But the film is 150 minutes long, and the family loses its struggle about half way through.  That leaves us Brody.  He is not enough, and soon, the film becomes tedious and stubborn.  Many characters help Brody (from an old flame to fellow musicians to a Nazi collaborator to a Nazi officer), but we don’t get to know them.  Polanski is content to stay with Brody as he becomes more emaciated and desperate, and in the end, little more than a caged animal.  To the extent Polanski wants to demonstrate that even through the most awful of horrors, people can survive and return to the pre-horror life relatively undamaged, The Pianist succeeds.  But as drawn in the film, it’s a minor success.