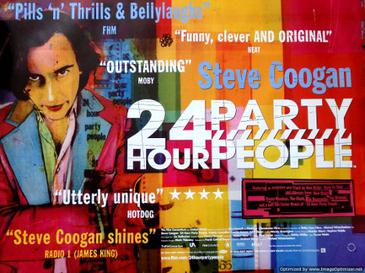 Michael Winterbottom’s time capsule sells itself as a rendering of the birth of the rave culture.  In fact, as the film’s protagonist – Manchester television personality and producer Tony Wilson – constantly informs us in fourth wall breaking break away chats and insights made directly to the camera, the film is about at least a half dozen things: Manchester itself, the rave culture, the birth of what I then-called the British moany-boy bands (Joy Division, New Order), punk, “selling out”, and the comforts of being the next big thing.

The picture has been reviewed in the following manner: “if you liked New Order, you’ll . . . “, as if enjoying the music is intrinsic to enjoying the picture.  Untrue. The picture is sharp and funny, regardless of whether you dig the music at its center (I never did).  Indeed, Winterbottom explicitly dispenses with the necessity of the bands being good.  With the constant wild Kurt Loderesque accolades to the bands (there are even two “geniuses”), Winterbottom is mocking the creation of mini-gods to fuel the gravy train.