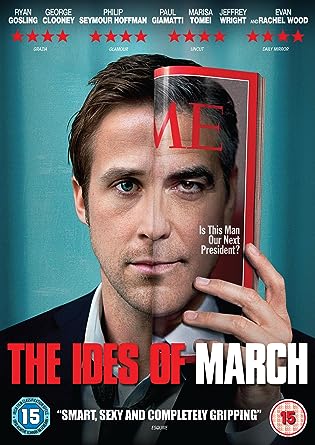 An earnest political tale, not as serpentine as Advise and Consent  and lacking the sense of humor of Primary Colors.  It’s closer to The Best Man.  That said, it could have used Gore Vidal’s involvement because the picture is dull, with dutiful performances by George Clooney as the flawed and dark presidential candidate; Phillip Seymour Hoffman as his “loyalty first” campaign manager; Paul Giamatti as the conniving rival campaign manager; and Jeffrey Wright as the oily senator who holds the key to the nomination. Based on a stage play, it feels stagey, but the biggest flaw is Ryan Gosling as the number two in Clooney’s camp who becomes embroiled in a web of intrigue.

Gosling is poorly written.  On the one hand, he’s presented as whip-smart and an up-and-comer, but some of his missteps are so glaring as to be ridiculous.  Note to self:  when having to pay off the massive fee of $900 to take care of a problem, DO NOT USE PETTY CASH!

The plot is also a little too tidy (why is meeting with the rival campaign manager presented as the equivalent of a paid sexual tryst with a transvestite?) and sometimes, the perfect rebuttal is foregone for the weight of the message.

There’s also a political imbalance that is a little distracting.  Christopher Orr nails it:

Alas, The Ides of March wears its ever-bleeding heart on its sleeve. As frontrunner Morris, Clooney is to Barack Obama as Martin Sheen was to Bill Clinton, an uncompromising embodiment of the liberal id. He waves his irreligiosity like a banner, vows that with a greener energy policy, “you don’t have to bomb anyone, you don’t have to invade anyone,” and publicly derides the gay-marriage debate as a “silly argument.” (He even gives the right answer—with the benefit of 23 years’ hindsight—to the historic Michael Dukakis death-penalty gotcha.) A war hero turned antiwar, Morris is Wesley Clarke crossed with Dennis Kucinich crossed with Robert Redford in The Candidate. It’s little wonder that from the film’s vantage point on the ideological rim, moderate Democrats are Machiavellian devils, and Republicans—I may be mistaken, but I don’t believe a single one appears onscreen throughout the entire course of the film—are an inconceivable evil looming on a distant horizon, like the White Walkers in Game of Thrones.